So you’re sitting around one say catching up on your RSS Feeds, using Bit torrent to DL some p0rn, and reading “3001: The Final Space Odyssey” [Arthur C. Clark; 1997] when you get an itch to push (well, wouldn’t it be pull) some electrons around some copper. But you don’t just wanna stop there. You want to Really turn up the Nerdness. So what do you do? 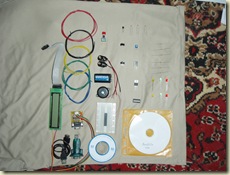 the “light of heaven”>. Know a little C? Wanna fark with some electronics? Wanna learn about doing both at the same time? Nerd Kits is the way, the truth, and the LED.  This kit was put together by a duo of 1000 lbs. heads by the names of Humberto Evans and Mike Robbins. These cats graduated MIT with various degrees of which folks like ourselves could only dream. But they’re down-to-earth chaps of high caliber.

Being posted in Iraq at the moment, I had to shoot them an email to see about having the particle manipulator of the gods [in a box]* shipped via APO. Not only was the response timely, but it was also enthusiastic. These cats really do care about getting the ability to mess with really advanced electronic principles out into us laymen’s hands.

For my part, the most important and precious component of this kit is the included PDF. This gem is part instruction set, part digital electronics introduction, and part instigator. It tells you what connections to make for a number of projects, WHY you’re making those connection, as well as leaving these tantalizing bits that send you off into a tizzy to learn more on your own.

Their site is informative about the kit and who they are. I suggest heading over there and checking it out. Eh, I more than suggest. By order of the Caffeinated []Nerd Legion of Nettingshire you are commanded to check this deal out! 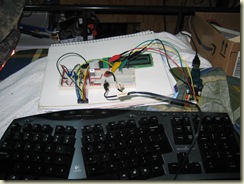 You are such a NERD

It's a great kit. I am glad I got it instead of an arduino clone. I love how it's all put together on the breadboard, just a few parts and you have a fun project...

Rob
Get a hold of me on yahoo and ask.

Get this as an RSS Feed: